Treasures of the National Library of Scotland is a new permanent thematic display, featuring objects from the extensive collection at the Library. From early printed books to video installations, maps and medieval manuscripts to passports and letters, this changing display provides a unique insight into Scotland’s history, culture and people, and its place in the world.

The Treasures exhibition opens to the public on Friday 25 March 2022, and features work from the breadth of the National Library’s collections. Some displays will be refreshed every six months to explore the many rich facets of the Library’s archives.

Entry to Treasures exhibition is free of charge, and suitable for all ages, with text in English, Gaelic and Scots.

As well as the physical exhibition, Treasures will have a dedicated space on the Library website, featuring items that have been part of the exhibitions, blogs and video content.

The written word has played a vital role in the spread of ideas.

Robert Burns (1759-1796) is Scotland’s most famous poet. His work is celebrated around the world.

Scottish Gaelic language and culture are an integral part of the identity of Scotland.

The Library holds one of the world’s largest collections of Scottish Gaelic printed books and manuscripts.

The Library collects material relating to the history of Scotland, from everyday life to defining moments of national significance.

Maps frame our view of the world and our place within it, The Library has the

largest collection of maps in Scotland. All parts of the globe and all eras of

mapmaking are represented, from early atlases to digital mapping.

The Library’s collections are enriched with travellers’ tales.

control and understand the world.

Leisure pursuits and the arts can create a deep sense of joy, shared endeavour and community

The birthplace and home of great writers, Scotland has a rich literary culture which has developed over centuries.

Books have long been cherished as works of art; for their text, illustration and binding.

Scotland has a long history of political movement and collective action.

The innovation of the printing press transformed text production, enabling the rapid distribution of knowledge and ideas

The production of text has changed over time from handwritten manuscripts, to printed books, to digital publications.

There are further AV Displays within the space including:

Each artist has created a new work of poetry, prose, song or film in response to their collection item. This will be displayed on the AV interactive gallery within the Treasures exhibition, as well as on The National Library’s website and social media. As a central part of the digital offer for Treasures, a filmmaker is creating films capturing the artists’ works, their connection to the Treasures item, and are filmed in a spaces or places connected to the artists’ practice. [full list in notes to editors].

The launch of Neu! Treasures! is scheduled to take place live and in-person in The National Library on 1 April. Library Late x Neu! Reekie! Tickets, Fri 1 Apr 2022 at 19:00 | Eventbrite

Amina Shah, Chief Executive and National Librarian, said: “As guardian of the nation’s published and recorded memory, we have an unparalleled collection of materials. The Treasures exhibition gives people a glimpse into the vast collections – many of which are typically stored among the multiple floor levels beneath their very feet. We’re excited to launch this much-anticipated exhibition, which will provide visitors with unique insights into Scotland’s story, and its place in the world.” 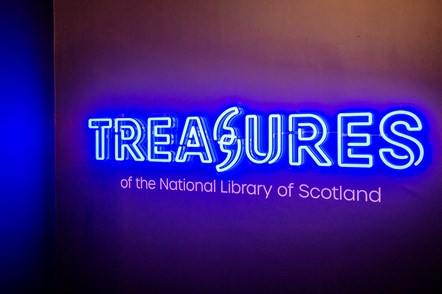 Treasures of the National Library of Scotland exhibition